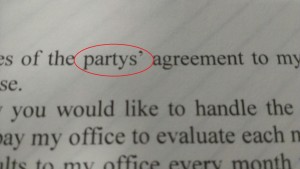 I looked at this several times before I figured out what was wrong. Then I looked at the actual Taco Bell website to make sure it was wrong and it wasn’t just me thinking that I knew what it was supposed to be. Then I just shook my head (which I do with a whole lot of these Grammar Giggles). 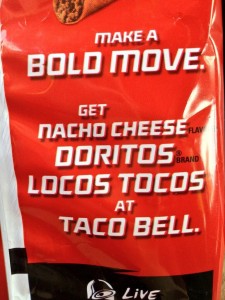 I must admit, semicolons are one area of grammar that scare me. I’m not sure why, but they do. That shows how much researching and writing these posts helps me as much as they hopefully help you.  Now on to our topic.

The semicolon is a mark of punctuation to be used when you want to connect two thoughts that are similar to one another. The best description I’ve seen is that a semicolon is like a soft period which separates the thoughts but keeps the flow of the first sentence.

Here are some rules for using semicolons:

That’s it for now. This is a very busy, emotional, exciting, and gratitude-filled week for me as I leave one job with people I’ve worked with for over 15 years to a job at a brand new firm. How exciting is that going to be? I’m so up for this adventure! But first, as one of my associates said when I gave my notice, “So you’ve given your notice at work, what are you going to do now?” I’m going to Disneyland–with my daughter and my two oldest granddaughters celebrating their 13th birthdays. Enjoy your week!

Here is the first page of a court document floating around on Twitter. I’m pretty sure it should say “back” surgery, but I suppose the other detail fits so I could be wrong. This is another example of just how important it is to actually read something before it is filed. 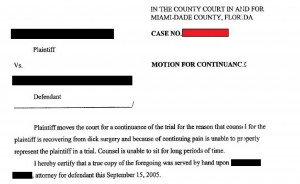 A friend visiting Ohio sent me a picture of the menu at a Mexican restaurant there. Living in Arizona, Mexican food is a staple and I’ve read lots of Mexican food menus in my lifetime. I’ve never seen anything like this and as much as I love jalapeno poppers, I don’t think I’d try them at a place that calls them “jalapeno pooppers.” 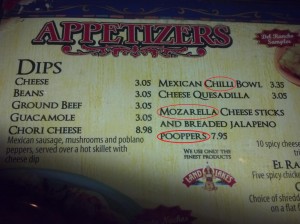 One would think that when there is a word that is difficult for lots of people to spell correctly, you would look it up to confirm the correct spelling before you put it on a public sign. 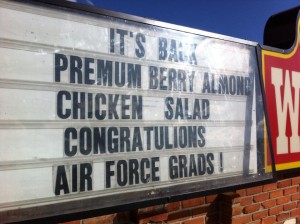