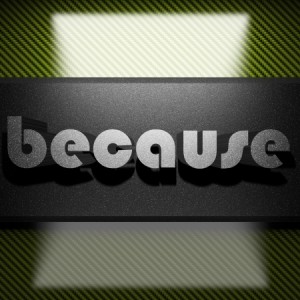 I’ve seen a couple of places a new “Word of the Year” as voted on by the American Dialect Society (“ADS”) for 2013. The ADS fancies itself “the best” because, like the Oscars, it is the last group to choose the “Word of the Year” at its January conference. ADS’s word for 2013 is because–both as its Word of the Year and as the most useful word of 2013. Why did they choose because? First some background on the ADS. It is a group of linguists, lexicographers, and other language scholars. This group holds an annual three-day conference full of academic sessions and paper presentations and holds it in conjunction with the Linguistic Society of America so they have nearly 200 people voting on their Word of the Year and other awards. The ADS even has a New Words Committee. A whole committee dedicated to seeking out new words. But on to why because is the ADS Word of the Year.

According to Ben Zimmer, chair of ADS’s New Words Committee, because is “. . . a very old word that’s deeply embedded in the language, which people are finding new ways to use, and very often it’s intentionally laying with established rules of grammar. I think the fact that this is such a linguistic innovation really appealed to a room full of linguists.”

So in addition to using because before a full clause or with the word of, it is apparently now appropriate to use it to precede a noun, like because job, or before an adjective, like because awesome.

Other ADS winners were most creative (catfish, which is to misrepresent oneself online–usually on a social website), most unnecessary (sharknado, made famous by a made-for-TV movie), and most likely to succeed (binge-watch, which is watching several episodes of a show in one sitting).

It will definitely take me a while to get used to this one, but hopefully I can get used to it because awesome! (It will take a LOT of getting used to!)