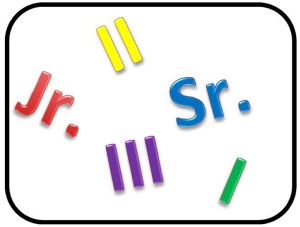 When a father and son have the exact same name (first, middle, and last) the son would use Jr. and the father would use Sr. If a son/grandson continues with the same exact name, the grandson would use III and father and grandfather could continue using Jr. and Sr. or could change to II and I, respectively. The Roman numeral designation II can also be used where a child is named after another relative like an uncle or grandfather. Royalty would always use the Roman numeral designations. The issue comes with whether or not to use a comma. According to the Gregg Reference Manual, the trend is not to use a comma to set off those elements, but the person’s preference should always be respected. If you know that the person prefers the comma in their name, follow these rules:

John Jones, Jr. (he is the president of the business club)

When preparing a letter from someone using the Jr., Sr., I, II, or III designation, you do not need to use the designation in the reference initials unless you need it to distinguish this person from another person in the same organization. For instance, a letter I type for Henry R. Miller, Jr. at Miller and Miller Law, P.C., a firm where his father also works, would show the reference initials hrmjr/kas.

Remember that these rules are in instances where the person prefers a comma before their generational designation. In cases where they do not prefer a comma, all of this information is unnecessary, but hopefully at least interesting.

One Response to Generational Designations and Commas