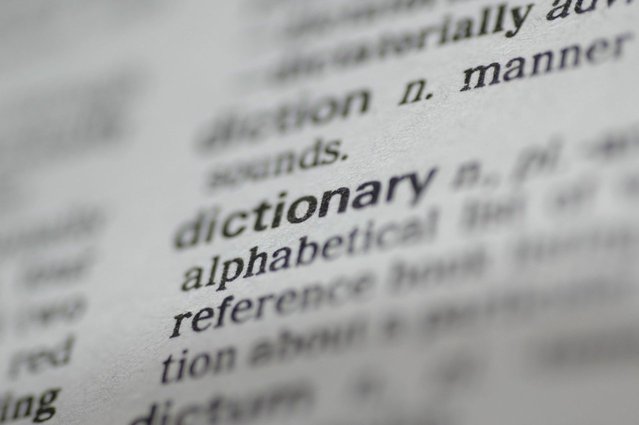 Dictionaries like to name their Word of the Year each year to indicate words that have become more popular in that year. It is definitely an interesting look at the American language each year. In 2015, Oxford and Merriam-Webster both chose a Word of the Year as did the American Dialect Society. With apologies to those who may be sensitive to the words that are not used in common language (at least in groups that you may run with), in the name of keeping it on fleek, I felt it was important to list them all so you would have the information uncensored and not with the intention to offend anyone. Let’s look at their choices.

The Oxford dictionary chose not a word at all, but the “Face With Tears of Joy” emoji. It is the first time that a pictograph was chosen over a word “that best reflected the ethos, mood, and preoccupations of 2015.” Just in case you don’t know what that emoji looks like, it is this one:

2015 was definitely a year of non-traditional “words” chosen as Word of the Year. Merriam-Webster.com for the first time chose the suffix “-ism” as its Word of the Year, which is the word most frequently looked up in their publication, because “a small group of words that share this three-letter ending triggered both high volume and significant year-over-year increase in lookups at Merriam-Webster.com. Taken together, these seven words represent millions of individual dictionary lookups.” The words with that suffix most frequently searched were socialism, fascism, racism, feminism, communism, capitalism, and terrorism.

ADS WORD OF THE YEAR

ammosexual: someone who loves firearms in a fetishistic manner. 42
ghost: (verb) abruptly end a relationship by cutting off communication, especially online. 25
on fleek: put together, impeccable, well-arrayed. 4
thanks, Obama: sarcastic expression in which a person pretends to blame Obama for a problem. 76
* they: gender-neutral singular pronoun for a known person, particularly as a nonbinary identifier. 187

mic drop: definitive end to a discussion after making an impressive point. 2
microaggression: subtle form of racism or bias. 62
shade: insult, criticism or disrespect, shown in a subtle or clever manner. 11
* they: gender-neutral singular pronoun for a known person, particularly as a nonbinary identifier. 214
zero fucks given, ZFG: indication of supreme indifference. 41

adult: (verb) behave like a grownup 71
* ammosexual: someone who loves firearms in a fetishistic manner. 153
lowkey: (adverb) to a small extent, in a subtle manner; opposite of highkey. 38
squad: one’s posse or close circle of friends. 3
yass, yaass, yaaass, etc.: expression of excitement, approval or strong agreement. 43

dadbod: the flabby physique of a typical dad. 16
* manbun: man’s hairstyle pulled up in a bun. 207
or nah: question tag expressing that something may not occur. 34
trigger warning: alert for potentially distressing material. 10
thanks, Obama: sarcastic expression in which a person pretends to blame Obama for a problem. 34

ADS MOST EUPHEMISTIC
af, asf: intensifier after an adjective (abbreviation for “as fuck”). 1
lit: amazing, exciting or fun. 2
* Netflix and chill: sexual come-on masked as a suggestion to watch Netflix and relax. 315
swipe right/left: accept or reject (based on gestures used on Tinder dating app). 24

ADS MOST LIKELY TO SUCCEED

Don’t you feel smarter now? I had heard some of these expressions, but didn’t know exactly what they meant. Now I do.