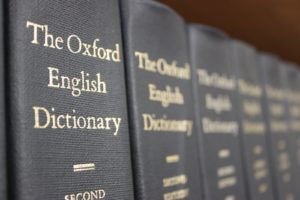 The Oxford English Dictionary recently added some new words. I always like to see what kind of words make it into the dictionary each year. My very favorite–the “Word of the Year”–will show up in a couple of months, but for now, here are some of the new words that have shown up in articles about these additions.

Biatch – A sassy version of “bitch.”

Clickbait – A story or content that draws you in with a headline but probably won’t deliver.

Clicktivism – Using social media and the internet for social or political activism.

Jagoff – An obnoxious and rude person who is usually characterized as a man.

‘Merica – A shortened (and some think more patriotic) way to say “America.”

Shoplifting – Stealing something from a store without paying for it. (I’m not sure why this word hasn’t been in the OED before now.)

Squee – A screech that comes out when you’re really excited about something.

Vom – A shorter way of saying vomit or to explain that someone is in the act of vomiting.

YOLO – An acronym for “you only live once.”

There are more than 500 other words added, but I chose just a few. Since I don’t have a subscription to Oxford English Dictionary, I can’t get their “official” definitions, but I am assuming if they are adding words that are now part of our language, definitions found on the Internet will be close.

The entire list of words added to the Oxford English Dictionary is here – http://public.oed.com/the-oed-today/recent-updates-to-the-oed/september-2016-update/new-words-list-september-2016/