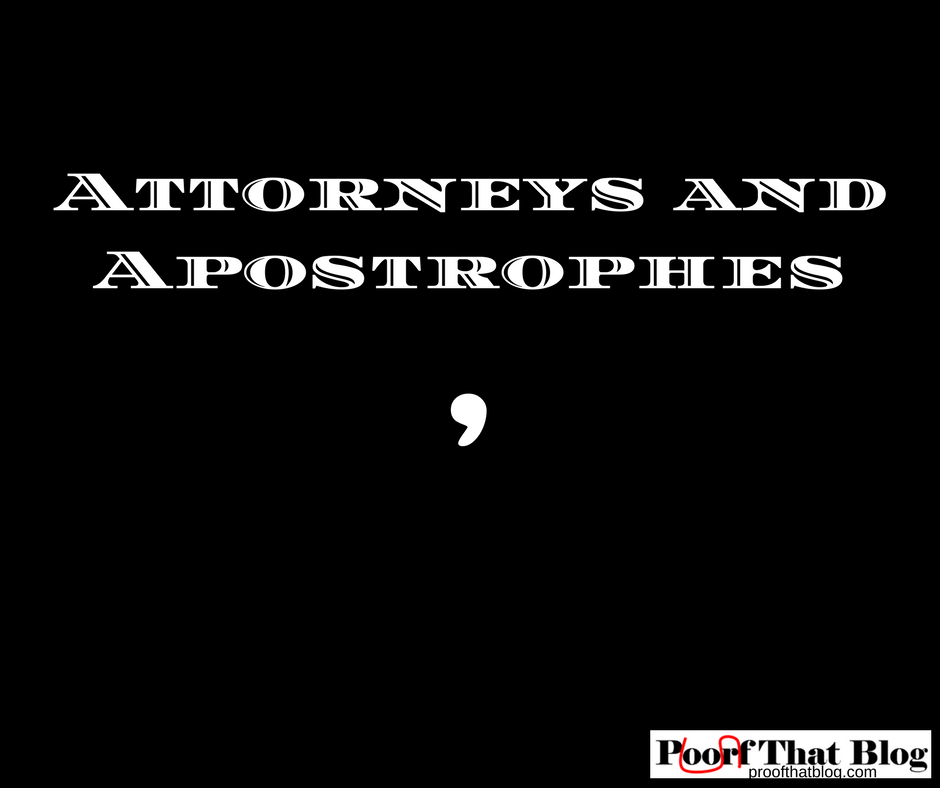 I found this article and thought it was interesting. Incorrect use of apostrophes is probably my biggest pet peeve. It isn’t really hard. If you need to show possession or show that letters are missing, use an apostrophe. Otherwise, for the most part, do not use an apostrophe. There are, of course, exceptions, but you need to learn the difference because I’m pretty sure that you don’t want your attorney’s work to be the topic of a FindLaw article.

Attorney Objects to Motion’s Use of Apostrophes, Possessives

Or at least that’s what her fellow attorney had to say when he responded to a complaint in a civil lawsuit filed by Bluebaum.

Her egregious use of apostrophes made it impossible to tell who she was referring to and when.

Anissa Bluebaum is representing Alison Peck (a teacher who was busted for sleeping with her students) in a lawsuit against her former probation officer, Rebecca Martin, reports the Springfield News-Leader.

When Martin’s attorney, Richard Crites, received the complaint, he was a bit baffled. But Crites soldiered on, responding on behalf of his client.

With 8 pages of questions.

Apparently, the lawsuit was filed against Martin and her brother, but because Bluebaum had rendered the complaint incoherent by misusing both “defendants” and “defendant’s,” Crites was unable to tell whether statements were referring to one or both parties.

He also requested that Bluebaum respond to his request in paragraph form.

Did Bluebaum write her pleading like a stream-of-consciousness text message, too?

As you may know, glaring grammatical errors can be disastrous to your case (and make you look a bit ridiculous). So the next time you’re confronted with multiple parties to which you need to attribute actions or statements, keep the following in mind: