Confused yet? How about these:
Whether you use is or are will let your reader know what you mean.  By saying “None of his electronic devices is set up correctly,” your reader should understand that you mean that not one of his many devices is set up correctly. When you say “Of all his electronic devices, none are using Wi-Fi,” your reader understands that you mean that not any of his many devices are using Wi-Fi. The difference is relatively minor and regardless of which way you use it, some people (who learned that none was always singular back in 4th grade) will try to correct you. Know that as long as you are comfortable that you are using it correctly for what you mean, you can treat them like your mother-in-law—smile, nod your head, and keep doing it your way.

Today I was forced to change an attorney’s password on the State Bar website. The screenshot below was what I received in response. I did send them a notification and hopefully it will be changed soon, but it’s a pretty obvious error. 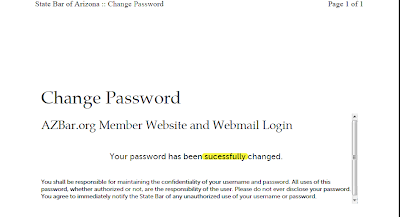 As some of you know, it has been very cold in Arizona this past week. One of our local news channels (the same one that had trouble with Justin Bieber “loosing” his lunch) is at it again. I don’t watch the news every night, but may have to make it a habit if I can continue to get Grammar Giggles material. Anyway, I digress. It was so cold here that we had a “freeze” watch . . . at least that’s what all the other news stations called it. 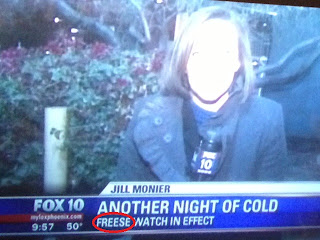 A friend sent me this from her local grocery ad. Apparently “by the ea.” is a new standard of measurement. 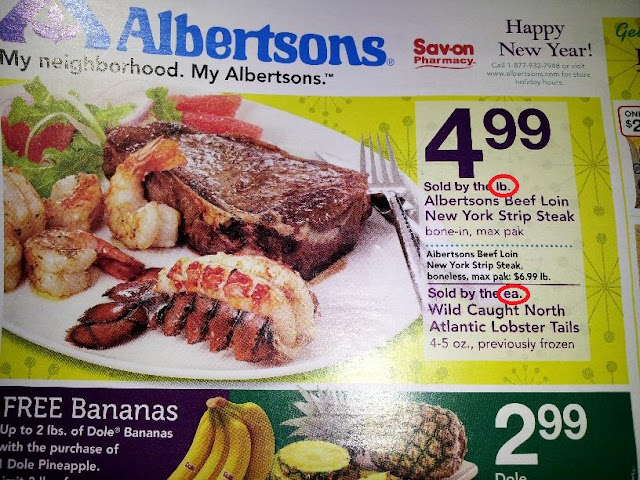 I saw this earlier this week on a local television news station website. Come up with different verbs to use where this is missing one and this headline could offer hours of entertainment!

brain cramp n (1982) : an instance of temporary mental confusion resulting in an error or lapse of judgment

bucket list n (2006) : a list of things that one has not done before but wants to do before dying [popularized by the movie title]

cloud computing n (2006) : the practice of storing regularly used computer data on multiple servers that can be accessed through the Internet [technology]

earworm n (1802) 1 : corn earworm 2 : a song or melody that keeps repeating in one’s mind [“this summer’s example being the inescapable Call Me Maybe by Carly Rae Jepsen.”]

energy drink n (1904) : a usually carbonated beverage that typically contains caffeine and other ingredients (as taurine and ginseng) intended to increase the drinker’s energy

e-reader n (1999) : a handheld electronic device designed to be used for reading e-books and similar material

game changer n (1993) : a newly introduced element or factor that changes an existing situation or activity in a significant way

geocaching n (2000) : a game in which players are given the geographical coordinates of a cache of items which they search for with a GPS device

man cave n (1992) : a room or space (as in a basement) designed according to the taste of the man of the house to be used as his personal area for hobbies and leisure activities

mash-up n (1859) : something created by combining elements from two or more sources: as a : a piece of music created by digitally overlaying an instrumental track with a vocal track from a different recording  b : a movie or video having characters or situations from other sources  c : a Web service or application that integrates data and functionalities from various online sources [“Whether it’s a politician contradicting him or herself with excerpts from different speeches shown in quick succession or Danger Mouse’s Grey Album, mixing Jay-Z with the Beatles, we’ve come to expect combined and rearranged elements that bring new perspectives and new creativity to our culture with mash-ups,” says editor Sokolowski. “It’s a recent phenomenon, made possible with digital editing, and it has a fun and descriptive name.”]

sexting n (2007) : the sending of sexually explicit messages or images by cell phone

shovel-ready adj (1998) of a construction project or site : ready for the start of work

systemic risk n (1982) : the risk that the failure of one financial institution (as a bank) could cause other interconnected institutions to fail and harm the economy as a whole [the global financial crisis]

tipping point n (1959) : the critical point in a situation, process, or system beyond which a significant and often unstoppable effect or change takes place

toxic adj  (1664) … 4 : relating to or being an asset that has lost so much value that it cannot be sold on the market

underwater adj (1672) … 3 : having, relating to, or being a mortgage loan for which more is owed than the property securing the loan is worth

You will note that many of these are just additional definitions for words that have been used for years (and sometimes centuries). It is comforting to me to know that while our language is constantly changing, Merriam-Webster is making an effort to keep up. Learn them, use them correctly, and prove to everyone just how “current” your language is!

I stole this from a friend’s Facebook page today. I’m VERY glad I live in Arizona. 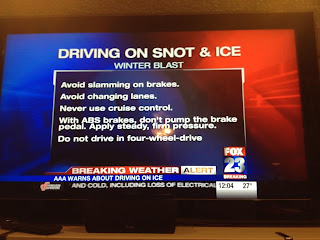 Anxious and eager are two words that are easily confused. There is a difference.

The dictionary.com definition of “anxious” is “full of mental distress or uneasiness because of fear of danger or misfortune.” It is derived from the Latin anxius which means “worried, distressed.” Anxious comes from the same root as anxiety. That should help you remember that anxious has a bit of a negative connotation.

I am anxious for the final exams because I didn’t study and don’t feel that I’ll do well.

I am eager for the final exams because I studied hard and am ready for the semester to be over.

Since I got my shopping done and everything wrapped two days early, this year, for the first time in many years, I am EAGER for Christmas to get here!

If you want more proofreading fun, there is now a Proof That Facebook Page (https://www.facebook.com/groups/192879267503552/) where I repost from other grammar and proofreading Facebook Pages and other sites for your entertainment and education. I wish you and yours a very Merry Christmas. My best present this year is your continued support of this blog and the articles that I’ve written for the NALS docket. Thank you!